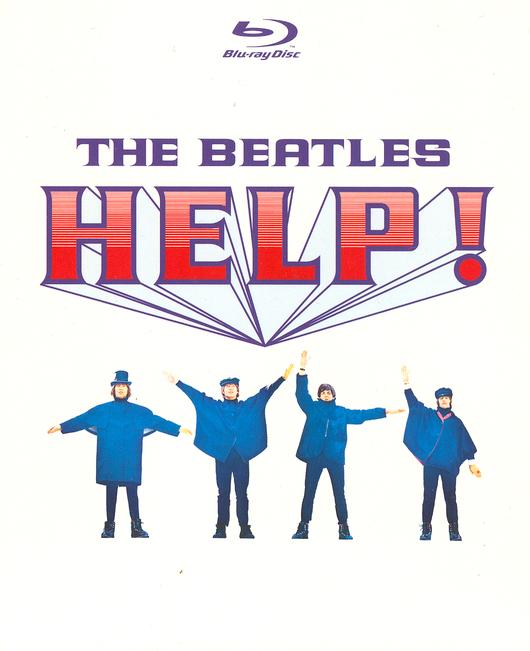 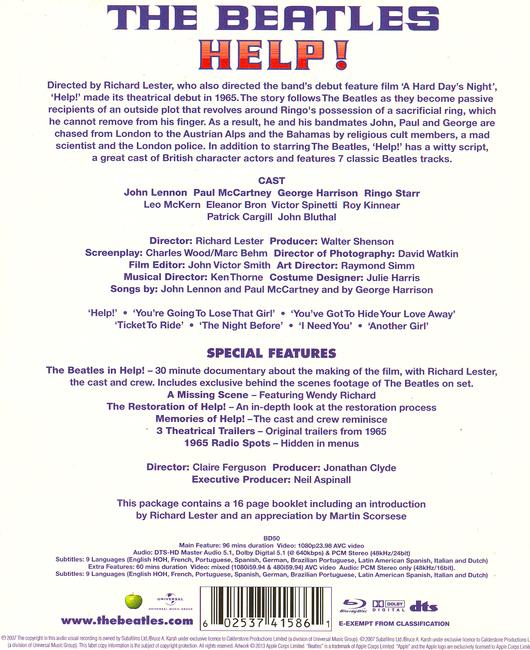 Help! appears on Blu-ray in a single-disc package pairing the digitally restored film and 5.1 soundtrack with an hour of extra features, including a 30-minute documentary about the making of the film, memories of the cast and crew, an in-depth look at the restoration process, an outtake scene, and original theatrical trailers and radio spots. An introduction by the film's director, Richard Lester, and an appreciation by Martin Scorsese are included in the Blu-ray's booklet.

Directed by Richard Lester, who also directed the band's debut feature film, 1964's A Hard Day's Night, Help! follows The Beatles as they become passive recipients of an outside plot that revolves around Ringo's possession of a sacrificial ring, which he cannot remove from his finger. As a result, he and his bandmates John, Paul and George are chased from London to the Austrian Alps and the Bahamas by religious cult members, a mad scientist and the London police.

In addition to starring The Beatles, Help! boasts a witty script, a great cast of British character actors, and classic Beatles songs 'Help!,' 'You're Going To Lose That Girl,' 'You've Got To Hide Your Love Away,' 'Ticket To Ride,' 'I Need You,' 'The Night Before,' and 'Another Girl.'

Help!'s Blu-ray package pairs the digitally restored original film with these extra features: (1.) 'The Beatles in Help!' a 30-minute documentary about the making of the film with Richard Lester, the cast and crew, including exclusive behind-the-scenes footage of The Beatles on-set. (2.) 'A Missing Scene' a film outtake, featuring Wendy Richard. (3.) 'The Restoration of Help!' an in-depth look at the restoration process. (4.) 'Memories of Help!' the cast and crew reminisce. (5.) 1965 Theatrical Trailers two original U.S. trailers and one original Spanish trailer. (6.) 1965 U.S. Radio Spots (hidden in disc menus)

Ayreon - Electric Castle Live And Other...